From Bob Walker , a member of the Mariners  with updates  by other members
The original folk-hippie scene in 60s Louisville was focused on 2 places (both on Bardstown Rd in the Highlands).  Those places were the Shack and the ZAPOT (Topaz spelled backwards).  The early folk groups were The Willow Street Singers and Don Francisco (now a Christian entertainer).  The Shack was really the hottest spot for music while ZAPOT was a beatnik coffee house with some music.  Later on in the Cumberlands were formed after we had graduated from college.  They are still around today in Louisville. http://www.thecumberlands.net/
The biggest Bluegrass Group that came out of the ‘Ville was Bluegrass Alliance and the best Bluegrass venue was 118 Washington Street and the Red Dog Saloon both down near the river off of Main St.  I heard some great acts there over the years.
1961
Rick Rice ,Henry Bass ,Bob Walker , Lyndle Barnes ,Eric Reed (Top)Eddie Kopp 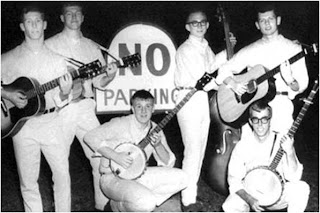 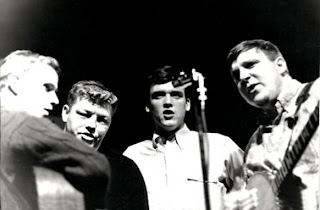 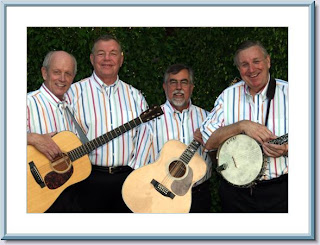 Back in 1961 a lifetime of fun began for five young men from Louisville, KY. Little did they know that 50 years later they would still be playing music together? That fun manifested itself in the form of several folk singing groups (Kinsmen, Piltdowners) and eventually the Mariners. The Seneca High School students that formed the original group consisted of Eric Reed, Henry Bass, Rick Rice, Eddie Kopp and Bob Walker. Through their high school days they were joined by other talented musicians like Lyndell Barnes ( Bass) Jack Wallin ,Don Waddell, George Wong (guitar), Bob and Glen Hines (Guitar, banjo) and even three female singers (for one memorable performance); Vennie Neal, Jackye Shoptaw and Missy Coxwell .
The early sixties was a time for rekindling a love of traditional folk music and an awakening of our conscience with protest songs from a new generation of writers like Bob Dylan, Pete Seeger and Tom Paxton. The Mariners played the music of that era with songs made popular by the Kingston Trio, Peter, Paul & Mary, the Christy Minstrels, Brothers Four, Highwaymen, Serendipity Singers and (even) Flatt and Scruggs. They played private parties, churches, school events and a myriad of picnics and festivals that kept them busy until the end of their high school days in ‘64-65.
After graduating from Seneca and the departure of Eric Reed and Eddie Kopp to colleges out of town, the group took on a new look with the addition of Brad Matthews and Jack Matthews from the University of Louisville. Tom Sparks joined them, from time to time, on bass. During this period the group had its first (and only) manager. Bill Grubb managed the Mariners for several years and booked the boys into many unusual jobs that brought out the member’s collective creativity to “pull it off”.
In the mid-sixties the group played many university concerts, local TV and Radio shows, and a steady stream of private parties. They were chosen to represent the University of Louisville in Hollywood on the syndicated “Your All-American College Show” and took part in the televised productions of the Miss Kentucky Pageants for several years. The Mariners disbanded in ’69 after college graduation and played (what they thought was) their last job together.
After college the guys headed down their individual paths through life:
Eddie Kopp went to Davidson University where he received his Doctorate of Theology. Eddie now resides in Louisville. He and his wife, Kathy, have 3 children.
Henry Bass attended Western Kentucky University and now lives in Louisville. He retired in 2006 and he and his wife Moddie have one daughter (Shannon).
Brad Matthews stayed in Louisville where he earned his Doctorate in Education. He worked in the public school system until retirement and now consults with school systems across the US. Brad and his wife, Pauletta, have one daughter (Sarah).
Rick Rice graduated from U. of L.’s Dental School and moved to Burke, VA where he set up practice in 1973. He and his wife, Carolyn, have one daughter and three grandchildren.
Bob Walker left Louisville in ’69 after graduating from U. of L.’s Speed Scientific School. He has lived in 11 cities during his corporate career and currently resides in Knoxville, TN with his wife, Honey Lou. Bob has three sons and 11 grandchildren.
Jack Matthews received a Masters in Sociology from U. of L. and a Doctorate in Education from the University of Tennessee. Jack passed away in 2003 and is survived by his wife Katie and son Jack.
Eric (Rick) Reed graduated from Eastern Kentucky University. He worked in Pharmaceutical Sales prior to joining his families’ business (V. G. Reed) in Louisville. Eric passed away, suddenly, in 2007 and leaves his wife, Sandy, two children and five grandchildren.
Through the years, the Mariners have performed at their high school reunions, fund raisers, cruise ships and other special celebrations. They meet in different locations to renew old friendships, pick & grin and have as much fun as ever. Though the ranks have diminished and the hair a little greyer, the spirit remains. They’re still playing for the fun of it!
So:
In celebration of Eric Reed, Jack Matthews and 50 years of friendship


Mariners Live
" Rock Island Line" live at the Louisville Yacht Club 2006
Here is the group that beat the Mariners at Your  All American College show
Posted by Unknown at 8:36 AM