Garage Bands In Louisville in the early 60's from Mike Gossett

Our thanks to Mike Gossett for this portrait of Louisville Rock and Roll . We hope there is much more to come . If any of you all have memories you would like to share , please comment .

Please see Mike's earlier post ( A planted seed ) on the Louisville Music  blog and learn how the Bitter Seeds were named .

You know, my temperature's risin'
The jukebox's blowin' a fuse.
My heart's beatin' rhythm
And my soul keeps a-singin' the blues.
Roll Over Beethoven and tell Tschaikovsky the news.

In the spring of 1956, at the critically impressionable age of 11, when my friends and I were just graduating from elementary school, Chuck Berry in musical verse famously suggested that Beethoven should roll over and tell Tschaikovsky the news. The news was aplenty, not the least of which that there was a musical revolution coming that would make all other music from the present to the ancient past seem but a footnote.

Chuck Berry, Little Richard, Bo Diddley, and Ray Charles were some of the “prime movers” of the musical revolution underway. The new music was simply fused elements of black gospel, deep south rhythm and blues and hard core country music. The official arrival and identification of the new music as rock and roll would come via a good looking white kid from Tennessee by the name of Elvis Presley.
An international spending spree ensued on electric guitars, drums, and saxophones by rock music enthralled teens. Mel Bay “How to Play the Guitar” books flew off the shelves. Hours and hours of listening to the latest hit records, and mind-numbing practice sessions in an attempt to clone the exact sound of the revered rock and roll icons took up every free moment of wannabe rock and rollers. The same zeal would apply for a cappela, street corner harmonizing dubbed Doo Wop. Rehearsal halls for this new music was typically the suburban neighborhood garage (or basement) thus the term “garage band” would later became part of modern American lexicon.

By autumn 1959 when these very young fresh music zealots headed off to high schools some of best rock and roll and Doo Wop talent in the nation had bloomed in our home town. The Carnations and Tren-Dells, The Sultans, Cosmo and the Counts, The Monarchs, The Epics, and The Bitter Seeds were playing music at high school sorority dances, teen clubs, proms, and yes even seedy night clubs in and out of Louisville. These teen bands played clubs in the infamous Lebanon, KY., e.g. The Golden Horseshoe, Club Cherry and Club 68, clubs that hosted national talents like Ike and Tina Turner, Bo Diddley, B.B. King, Fats Domino, Otis Redding, and many more. And the aforementioned Louisville teenage bands graced these same stages, most not even old enough to drive. A father of one of the musician’s in our band, The Bitter Seeds, would rent a school bus and driver to get our band to our club performances in Lebanon.

One of the most well known and looked up to teen rock and roll artist of that time was Wayne Young (Manual 1961), the teen guitarist all other Louisville teenage rock and roll guitarist aspired to be. His love of the new music, and natural talent produced a hard drivin’ rock and roll, rhythm and blues style of guitar playing (think Eric Clapton) that elevated him to professional musicianship that far transcended his young age. After his years at Manual, Wayne would go on to play with many other well known rock bands, cut records, and even did two tours with Dick Clark’s Caravan of Stars and Wayne is still going strong today in the Louisville music scene. (Go on line and Google Wayne Young.)

Another “garage band” artist of that time was Wayne McDonald (Manual 1962). He started out playing French horn in the Jr. High School orchestra. Don’t laugh, if you did not already know it, Bo Diddley was an accomplished violinist. Wayne started out as lead singer for The Bitter Seeds. Through a tenacious love of music, seeker of perfection, and a work ethic that none of us could match, he transformed himself from a classical French horn player into white vocalist versions of James Brown and Wilson Pickett. A testament to reaching authenticity and purity of heart thumpin’ soulful rock was the observance of the patrons of the all black club in Lebanon known as Club Cherry were on their feet and loudly showing their approval of his style, showmanship and music. I know, I was there. After leaving Manual, Wayne McDonald also worked with other well known rock bands, cut a few records, and like Wayne Young, traveled with Dick Clark’s Caravan of Stars. Unlike Mr. Young, Mr. McDonald has now hung up his rock and roll shoes. Unless there is a local gathering of the old Louisville rock and roll bands and Wayne is asked to come up to sing and give us all a moment to nostalgically relive the way things use to be in the early 1960’s at Manual and musical events in the south end of Louisville. 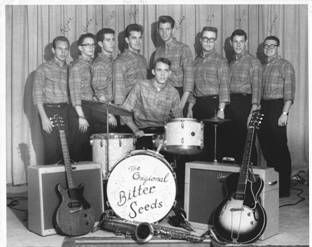