Paul Cowley RIP and Thanks for the Great Memories 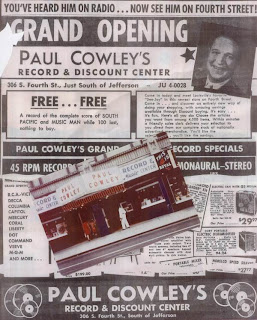 1 . "Just heard through the media grapevine that Louisville radio icon of the 1950s/'60s, Paul Cowley, passed away last week out West.  Last address I had for him was Santa Fe NM in 2005.  Paul was a longtime friend to our mutual buddy, singer Bob Bowman, who passed away in 2009.

For those old enough to remember, Paul was to the Louisville market what Alan Freed was to Cleveland during the heyday of Top 40 radio.  And he was a genuinely nice guy; my wife-to-be and I often talked to him in 1961 over Ranchburgers when he did his WKLO nighttime show from the Dixie Hwy Ranch House"
2 . "He truly was a nice person. Worked with him one for whole week in 1959 @ 7:30 Pm till midnight atop the Ranchouse as a “guest teen disc jockey”. Was a high school promotion and I was a Jr at St X. My job was to say between commercials ,’Stay tuned for the Everely Brothers new hit: “Claudette”….. #52 years ago…God Rest His Soul and  I know he is in R N Heaven….


Please add your own memories and comments


Editor Personal Note:
I remember going into the Paul Cowley record store ( my first stop not Vine or Variety ) trying to find " Pomp  and Circumstance " by Adrian Kimberly 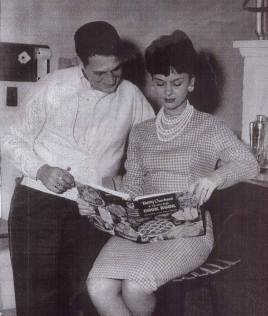 They did not have it but this 16 year old was helped by a gorgeous woman ( who seeing her picture must have been Mr Cowley's wife ) who kindly gave me a DJ copy . Over the years , I have played the song often  . Years later I found that Adrian Kimberly was a name used by the Everly  Brothers .
The article below is from a music journal at"
http://worldjournal-gs.blogspot.com/2007/01/everly-brothers-in-mid-1960s.html
The links in the article play the song and you can see a larger picture of the label
"In 1961 Don Everly produced three singles on his new Calliope label that were not Everly vocals. He used the artist name Adrian Kimberly, and used an orchestra and chorus. Listen to the first one:
Pomp and Circumstance - #34 Billboard
Black Mountain Stomp - flip side
Posted by Unknown at 11:58 AM