Monarch Band Member Memories
(provided by Louis "Dusty" Miller )
"The ( Del Shannon )gig was at the Buechel Armory, hot as Hell in July 1962. Del Shannon wore a long sleeve sweater. Cosmo did sing with the Monarchs and did  "You Got Me Going" with two sax rides.  Del did a third song after  Runaway,and Hats off to Larry. The third song was called "Little Dutch Maid" go  figure on that one. "

Blogger Note : Here is the song  -Del Shannon doing it live , it was  : "Swiss Maid "
( Thanks to Leonard Yates for this Info ) " I can add this FYI to the story. The tune Del would have played was The Swiss Maid. It was just being released as his new single (although one of his worst I think). It would make Billboard’s Hot 100 on Sept 15,1962 and peak a few weeks later at #64 for 5 weeks. His previous single was Cry Myself To Sleep which only peaked at #99 in May of '62 although it was good rockin’ single. The follow up to Swiss Maid was Little Town Flirt which charted in late Dec 62 and peaked at #12 in the winter of 1963. It was one of his biggest hits"


Del played lead guitar, the Monarchs switched around and provided a bass guitar player  ( Ernie Donnell ). The dance  was sponsored by  Greg Mason .
Now here are the Traveling Wilburys


Bo Diddley
"Greg Mason also  got The Monarchs  to play with Bo Diddley at the VFW on  Bardstown Road. His rhythm player was a girl named "Boobie Diddley" . She only knew one chord a "G" major, but then Bo played everything in"G" major except Road Runner.
Bo carried his guitars in a coffin wrapped in blankets. The drummer  had three different colors of drums, red, blue and gold. One of the cymbals had a chunk out of it like somebody took a bite. Somebody stole Greg Mason's hat that night (he always wore a hat) He looked
a wet rat with his hat off. The Monarchs bass player played bass on a couple of
songs while Bo's  bass player did acrobatics on the stage."

Notes from your humble blogger :
I was at the Bo Diddley gig in the audience and the stage was outdoors on the north end of the building . The Bo Diddey group was Bo , Jerome ( the maracas and bass player ) , the female guitar player ( I thought he called her Loma Diddley ) and the Drummer .
What a show ! 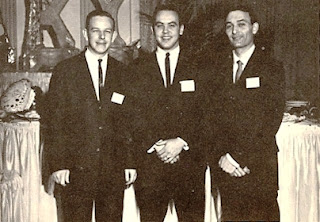