Tommy “Cosmo” Cosdon, widely considered to be the greatest singer to emerge from Louisville’s first wave of rock ’n’ roll bands in the late 1950s, died early Friday. He was 71..

Cosdon was also a veteran of the thoroughbred horse-racing community as a trainer, jockey agent and bloodstock agent. He trained Rae Jet, last-place finisher in the 1969 Kentucky Derby.

“He had two great interests: music and horses,” said longtime friend and band mate Wayne Young. “I’m not sure if horses weren’t first.” Cosdon battled cancer last year and was diagnosed as cancer- free in January, said lifelong friend Jim Harbolt, but the chemotherapy weakened his immune system and led to cerebral histoplasmosis, which causes lesions on the brain.

Harbolt said Cosdon requested no visitation or funeral, but a celebration of his life is being planned. A concert to raise money for Cosdon’s medical bills will be Oct. 6 at Jim Porter’s Good Time Emporium.

Cosdon’s legacy in Louisville will be as a singer and showman, said Marvin Maxwell, who remembers Cosdon galvanizing audiences as a member of The Sultans in the early 1960s. Maxwell later performed with Cosdon in the Shufflin’ Grand Dads, which began in 1992, and the current incarnation of Soul, Inc.

“He was Mr. Showman,” Maxwell said.

Maxwell said that in 1992, the Shufflin’ Grand Dads, which also included Young, performed at a festival in Mainz, Germany, as part of a sister-cities program.

“You can see on the video that it was pretty ho-hum, but when we brought Cosmo on the people got to their feet and he got them so wound up that we had five encores,” Maxwell recalled, “and I swear before the last one I heard the stage manager say, ‘We’d better let them go on again or the crowd’s gonna tear the stage down.’ “And it was Cosmo who got them up and going.”

Cosdon debuted in 1959 as singer of The Sultans, and the band’s 1961 single, “It’ll Be Easy,” was the first by a local group to reach No. 1 on Louisville radio stations. He broke away to start a solo career in 1961 and immediately scored a No. 3 hit with “I’m A Little Mixed Up,” a raw slice of blue-eyed soul.

Cosdon’s voice had crossover appeal, Young said, with a strong rhythm and blues feel. He frequently sang at The Cherry Club in Lebanon, Ky., a successful black nightclub, and was a regular at clubs throughout Kentucky and Indiana.

“He was a natural entertainer and he could just light people up — it was amazing,” Young said. “He could still do it. His voice had gotten better over the years, but it was the energy that he brought that was so impactful.”

“All he had to do was get up on stage and he had the audience in his hands,” Maxwell said. “He did that better than anybody I know of in this area.” 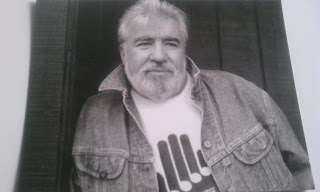