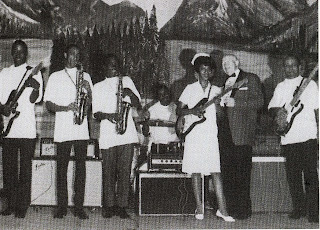 Blogger Note : In the tribute last Thursday to Piano Red AKA Dr Feelgood put on by Terry Adams and the Red Rockers , Roy Lee Johnson played Mr Moonlight and When A Guitar Plays the Blues ( Title of his great Bear Family album ) . The music was all great with Terry Adams playing in the style of Piano Red , mixture of Ragtime , Stride Piano and Blues . Beverly Guitar Watkins also played ( she was the nurse in Dr Feelgood ) and she can play with any guy including behind her head . Roy Lee did play a bit using his teeth .


The article below is from the Atlanta paper , Creative Loafing

Georgia-born singer and guitarist Roy Lee Johnson is best known for penning the song "Mr. Moonlight," which was covered by the Beatles on their fourth album, Beatles for Sale. But the song originally appeared as the b-side of Doctor Feelgood's self-titled single, recorded in 1961.
Johnson sang and played guitar with Doctor Feelgood and the Interns, alongside Piano Red(the subject of Vibes feature story this week) from '61 to '65, and will performing at Smith's Olde Bar as part of the Piano Red tribute show tonight (Thurs., Aug. 12)
Chad Radford: How did you get to know Red?
Roy Lee Johnson: I played with a group called the Brassettes from Hogansville and we used to play at The 81 Theatre. Red used to be down there, and we used to come up to Atlanta every Monday night and he would let us come on after their shows. That was 1955. Robert Ward used to play with us and he quit to start a band called the Ohio Untouchables. He came back down from Dayton to Franklin, GA — to my grandmama's school — and asked if I wanted to go to Dayton with him and play. But then he told me I couldn't play no more unless I got a union card. So I came back to Atlanta to get me a union card and I met Red coming out of the union hall. That’s when he asked me if I want to play with him?
So I was torn, but I didn't want to be with them in Ohio because they fight all the time. So I made a quick decision to play with Red. About a month later he told me they was going to Nashville to cut a record and he said ‘ya'll can put two or three songs on there,’ ‘cause he didn't have enough. So I had “Mr. Moonlight” and they put it on the flipside of “Dr. Feel Good." Then the Beatles heard it, man… About two months after that Red fired me. I didn't know what I was gonna do, and one day I was sitting at home and the union office called and told me to come get my money… It was $100,000! I never had that kind of money before and it scared me to death. I thought they made a mistake! Red fired me two weeks before I got my first real check.