This has been put together with information from the web site Rockabilly Hall Of Fame and from Ronnie Haig himself .I have been in touch with Ronnie who lives in Indianapolis and he would love to see your comments and to write a response.

Ronnie Haig was born Ronald D. Hege in Indianapolis, Indiana, on March 21, 1939. He attended technical high school from 1953-1957 and started playing around with a guitar at the age of 6. He did his first gig at age 16 (he made five bucks and a sandwich) and bought his Gibson ES295 Gold in 1957 (and he still plays it today!).
His 1958 releases were recorded at the Chess Studios in Chicago (Feb 18th 1958 Tuesday from midnight to 6 AM ), and at age 18 he started out on Note Records, later on ABC-Paramount. He played on. many recording sessions throughout his life, including his own.
Did You Know :. Ronnie is still playing that same Gibson ES295 that he bought in 1957 and, according to rock 'n' roll legend, traded licks with Chuck Berry one late night at the Chess Studios. One of those sides was " Pickin on the Wrong Chicken " also with Wes Montgomery on guitar


More on the Session from Ronnie in 2004
Blogger Note
Ronnie and I exchanged emails in 2004 and he told me " The Five Stars and I shared a recording block at Chess from Midnight to 6 AM recording a total of 4 songs. Two of theirs and two of mine. I played on theirs and they did the back up on mine. None of them played anything. But the band , what a bunch of musicians they were.
The Five Stars were: Lead, Ron Russel, First Ten: Jim Bruhn, 2nd Ten (Now Deceased) Larry Huffman, Baratone Bill Campbell, and on Bass Bruce Miller(later replaced by Popcorn Johnson (also now deceased)

(Comment: The Trendells were the group that covered "Baby" . I also played on The Students and For Jerry Seifert at Chess.I wrote both of Jerry's songs, Dirty White Bucks and Tight pegged pants and Never Baby Never.)

The band was a total growing up period for me. All legends. Jimmy Coe on Ten Sax, Pooky Johnson on alto sax, Wes Montgomery on Rhythm guitar, Henry Cain on grand piano, and Will Scott on stand up bass. Although I wound up playing on a total of 17 songs at Chess, this was my favorite session. Feb 18th 1958 Tuesday from midnight to 6 AM.

Blogger Note : I bought a copy of his CD then "Up Close and Personal"? I recommend it .

From those Chess sessions , Ronnie has this CHUCK BERRY MEMORY

It seems like only yesterday I was in Chess studios (Chicago) We were recording four songs for "Note Records" two of the songs would wind up on ABC Paramount March 1958.

During the halftime break in walked a tall black man.Didn't recognize him at first. He went upstairs to the soundroom said Hi then back down and in the studio with all us musicians. He looked at me and said "Can I see your guitar man?" I still didn't know who was asking the question. "Yeah sure - but be careful with it - it cost a lot of money" I replied.

I then went up to the soundroom and saw Jack Sheldon the baddest engineer in the biz. I could hear music but the tape wasn't running. I asked Jack "where's that coming from?" He said "Why that's CHUCK - you told him he could see your guitar" I was absolutely floored.

Went back downstairs - walked up to Chuck who was sitting Indian fashion on the floor with my GibsonES295. I said "Chuck, I feel like an ass not knowing who you were" "Don't sweat it man grab an ax and have a seat" He replied. I reached over to get Wes Montgomery's guitar and stopped-turned and said "Hey Wes - can I use your guitar a minute?" He replied with " Oh yeah! (laugh) but be careful with it - it cost a lot of money.

I had the thrill of my life that Feb 18th at 3:00 AM just sitting down on the floor- face to face with my hero (and still today) and learning some of his licks. I doubt if Chuck even remembers that meeting. But you know what? I'll never forget it if I live to be 100.

God Bless CHUCK! Keep that Reelin'-a-Rockin' and thanks for a wonderful experience that most guitar pickers only dream about.
-Ronnie Haig
From Ronnie October 26, 2010


Been a lot of talk around the internet about my friend Wes Montgomery playing a Gibson L5
He may have played one at one time or another, but when I recorded with him at Chess Studio at 2120 S.Michigan Av in Chicago, during 1958, he played a sunburst Gibson ES 175 with a single P 90 pickup.
He purchased that guitar at "Sacks Bros" at the corner of Indiana AV and Ohio Streets.
He used to practice out on the roof of his front porch  just outside the bedroom window. His wife came and took his straight picks away from him because it was keeping the kids awake. I believe he had 14 of them (kids)
Wes was just "Wes"  Always happy. Always ready to play. The man was magic  when it came to guitar inovations. He could make one talk. He really could. He always played with high volume, and picked "with that thumb of his" very softly. His parallel octave strokes have never been bettered. Never!
We worked together a lot on several Rock & Roll sessions. That's right! Rock and Roll.
He always said;" don't tell anyone I did this man"  He was just there for the 50.00 bucks he would make on the session. Hey with that many kids, someone is always either hungry or sick.
Didn't matter what style he was playing, he was there to have a good time. I told him I would teach him to use a straight pick if he wanted me to. hahahahaha He always said "No man, mama wont let me!"
I was blessed to know Wes. His fine recording of "Wendy" still blows me away. I have visited his grave many times at the cemetary at the corner of Raymond St and Churchman Av. here in Indianapolis. It's located on Wes Montgomery Blvd. at the east end of the cemetary. Stop by sometime and be sure you bring your camera. 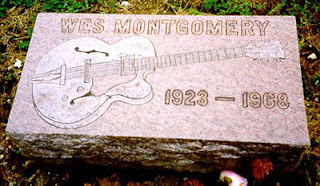