A Planted Seed Part I

A PLANTED SEED Part I
A history of the teenage rock and roll band The Bitter Seeds
By Mike Gossett, June 27, 2010 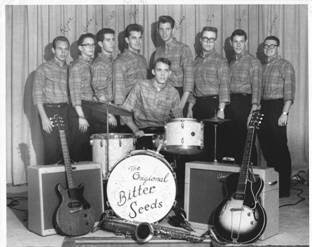 The Bitter Seeds Standing, left to right: Roger Pfeiffer, trumpet and background singer; George East, lead guitar; Mike Gossett, rhythm guitar; Jaybird, background singer; Eddie Huettig, background singer; Tim Hughes, saxophone; Wayne McDonald, lead singer; Eugene Roberts, piano; and seated, Steve Yeager, drummer.
Introduction
First of all, many heartfelt thanks to Bill Grubb who recently started this internet blog with a primary theme of collecting stories, musings, photos, recollections, etc. of anything to do with early (circa late 1950’s early 1960’s, i.e. pre-Beatles) teenage rock and roll bands in Louisville, KY. How timely Bill, The Bitter Seeds were organized just about exactly 50 years ago, a half century to put it in perspective.
This is my first contribution to this cyberspace collection of memories about one such teenage rock and roll band, one that I started and was a member of, a group by the name of The Original Bitter Seeds, here after just referred to as The Bitter Seeds as the truth is I have no recollection as to what the “original” in the name meant in the first place. But as far as where the name Bitter Seeds came from, well that is the primary subject of this my first entry.
Before turning to the story of the early beginnings of the Bitter Seeds a few things need be said.
The first being I am well aware of what a small and humble part I played in the organizing of this one of many teenage rock and roll bands and even more so, what a minor player The Bitter Seeds were as a band when compared to the more well known and popular groups of the time like The Sultans with Tom Cosdon (Cosmo their lead singer), The Carnations, The Trendells, The Monarchs. These groups went on to even cut records, something as a matter of Bitter Seed history that we never did. I once thought there existed an amateur recording of our group but if there was it never surfaced.
Never the less, small as we may have been in the overall big scheme of Louisville teenage bands, The Bitter Seeds did indeed get to as they say “run with the big dogs” meaning we got paid to perform, we played a lot of major nightclubs and venues of the time, we got booked with the better named local groups, and even participated in a rock show that included nationally known rock and roll stars, and near the end of our run as a teenage band we were even under contract with the local Louisville well known talent booking agency known as SAMBO which was an acronym for Sanders, Allen, Martin Booking Organization (more to follow in future entries to the blog.) And that coupled with Bill’s request to include our story I suppose makes the telling of The Bitter Seed story relevant and hopefully interesting at least to a few people that lived during that wonderful and fun time we often nostalgically refer to as “the 50’ and early 60’s as it happened in our part of the world, Louisville, Kentucky.
And finally, I need to say that because there is a lot to tell, even if we were not a major player I will not attempt to tell the story all in one writing but instead prefer to submit the history in parts and this being just Part I.
Pre-history
So what else needs to be said before embarking on telling of the humble beginnings of this particular teenage rock and roll band? Well a little pre-history can at least give insight as to how such small artistically musical enterprises come to be. It would not be a stretch to say that in at least some small way the history of The Bitter Seeds goes back as far as 1944 during World War II. That kind of bold claim of course deserves some explanation.
I was born in February 1944 during World War II. My father Charlie (Charles H.) Gossett was in the Navy during the war. As a sailor his service did include some time at sea but his 4 years in the Navy also included playing guitar in a Navy band for officer clubs in His taste in music as a guitar player was solidly narrowly focused on the pop music of the 1940’s war years, that being The Big Band genre, e.g. Tommy and Jimmy Dorsey, Glenn Miller, Benny Goodman and he idolized Frank Sinatra to drop just a few names. 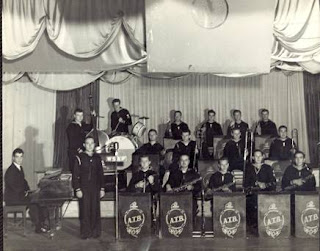 Charlie Gossett (Guitar Player, seated middle row next to bass drum) Navy Band circa 1944
Although a guitar player, my father had no interest in country music, other than maybe a mild appreciation of Eddie Arnold an entertainer of what we would say as having cross over appeal, i.e. an artist with such wide appeal that their music is appreciated and purchased by people who generally would not otherwise buy that kind of music. But he certainly would never have played that kind of music.
And my father certainly had no love at all for rhythm and blues. The few if any black artist he liked would have been The Mills Brothers and Nat King Cole, black artist that remained solidly in the genre of 1940’s jazz swing Big Band sound.
Never the less, the fact my father played guitar is at least the first link to how I, Mike Gossett, the infant son born to Charles and Dorothy Gossett, the newborn that slept in one of the drawers of a chest of drawers instead of a baby bed, the tyke  that got his weight gain progress as an infant measured not at a doctors office but rather by the butcher at Griffins Grocery Store on a meat scale, might indeed grow up to have some interest in the guitar as instrument of choice even if not imbued with the same taste in music as his father.
But there exist a more curious associated snippet of history here that will in some small way shape the future in terms of the formation of the teenage rock and roll band The Bitter Seeds. During that exact same time period, i.e. during World War II there was another man just 5 year younger than my father that was also drafted into the same branch of service, the Navy and coincidently he too was a guitar player.
But this man was a black man and since the military would not be integrated until after World War II it was not likely my father ever would have met this guitar player that would help influence and change the music world forever. This black guitar player also sang and played the harmonica but unlike my father his preference in music was rhythm and blues. And he was but one of many other musical artist like himself that would help usher out the Big Band era and usher in really more of a tapestry of music tied to R&B that would be come known as rock and roll.
The black guitarist, singer, harmonica blues artist was one Mathis James Reed or better known as Jimmy Reed. So what does Jimmy Reed have to do with the teenage rock and roll band that I formed 15 years after these two Navy guitar player ships passed in the night? 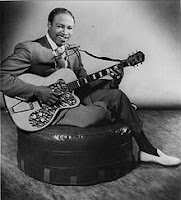 Jimmy Reed
First understand there were many things, people, artist, and even places that would later shape my love of rock and roll music and eventually lead to the formation of The Bitter Seeds. But it is important to say that while no individual can be said to have invented rock and roll, Chuck Berry comes the closest of any single figure to being the one who put all the essential pieces together and that Chuck Berry is probably the one individual that most influenced me to play guitar and to play rock and roll guitar. And keep in mind he was only 7 years younger than my father. Before Chuck Berry, before any other influences of any kind my impression of the guitar was a negative one, it was to me a hillbilly instrument. This was odd since my father’s guitar playing was the more sophisticated jazz, swing, Big Band sound. But Reed and , men almost the same age as my father changed my impression. These men were now playing the instrument with a hard driving thumping beat that spoke to me in a way no other instrument or music ever had and I was forever changed. I rushed to my father’s closet to dig out the Gibson guitar he used to play such magnificent smooth jazz sounds and I set to studying ways in which I could coax this fine instrument to now yield a raunchier, primitive thumping rock and roll sound that imitated these new black artist that swept up the hearts and minds of seemingly all American teens at the time. 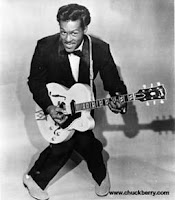 Chuck Berry
However, Mr. while the strongest influence was not the only one and another influence was indeed Jimmy Reed. Jimmy while maybe not widely known by all teenagers at that time, he was certainly known well by white teenage guitar players like myself that worshiped at the alter of rock and roll and rhythm and blues. For those of you that may not remember him readily consider the following:
·         Elvis Presley recorded several of Reed's songs, scoring a 1967 hit with "Big Boss Man" and recording several performances of "Baby, What You Want Me to Do"
·         "Big Boss Man" was sung regularly by the Grateful Dead.
·         "Baby What You Want Me to Do" was also frequently performed by Etta James.
·         The Rolling Stones have cited Reed as a major influence on their sound, and their early set lists included many of Reed's songs, including tracks like "Ain't That Lovin' You Baby".
·         The Yardbirds recorded a instrumental dedicated to him entitled "Like Jimmy Reed Again".
·         In 1991 Reed was posthumously inducted into the Rock and Roll Hall of Fame. Reed's recordings of "Big Boss Man" and "Bright Lights, " were both voted onto the list of The Rock and Roll Hall of Fame's 500 Songs that Shaped Rock and Roll.
In any event, I as a 15 year old white rock and roll guitar player loved old Jimmy’s stuff and in 1959, roughly the year that I began forming our teen rock band, Jimmy had an album out named “Rockin with Reed”. And on that album he had a song entitled “My Bitter Seed” thus was born the name of the band, The Bitter Seeds. I had the name for the group before I even had the band fully formed. As I recruited different guys to be in the band no one objected to the name or tried to change it. And so the name remained the same and as they say “now you know the rest of the story.”
In coming days/weeks I will follow up with additional parts to tell the rest of the Bitter Seeds Story. I hope to be talking with and getting input from some, in fact most of the old band members to help me with my fading memory and hopefully get them to inject their special memories and recollections. 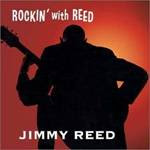